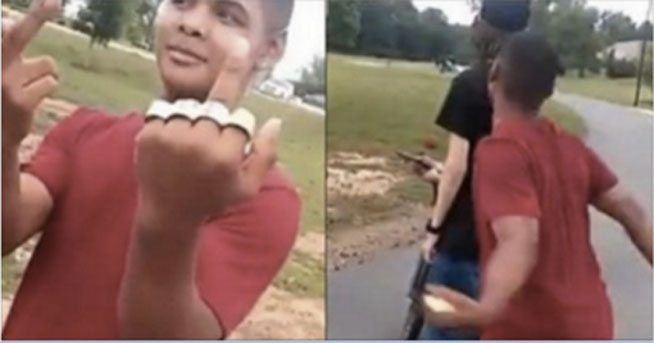 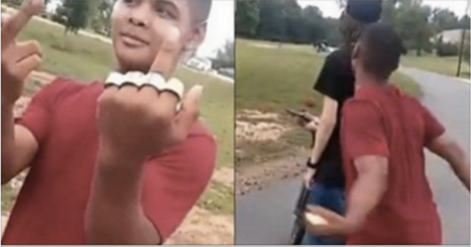 A Conway, Arkansas teen is looking at 20 years in prison for his sucker punching of a 12-year-old. He used brass knuckles when he punched the child.
It was late May when 16-year-old Kane Millsaps was captured on camera hitting the boy.
The video shows that it wasn’t just a sucker punch, but a weapon was involved. Millsaps was wearing brass knuckles.

First he flips off the camera, then goes up behind the boy and, using the brass knuckles, he pummels him in the face.
The boy then hits the ground, while a girl can be heard yelling “Kane!”
The attacker keeps punching the boy, in the face, while still on the ground.
Meanwhile, the attackers attorney had the following to say:
“The video is disturbing. It caused me, like everyone else that saw it, a good bit of discomfort.”
The damage to the boy included a bruised right eye, cut neck, and broken teeth.
The attacker, Millsaps, will be charged with first degree battery as an adult, and faces a maximum sentence of 20 years in prison.
His attorney’s reaction was the following:
“If he gets the maximum sentence, which I hope he doesn’t, he’ll get out when he is 36 years old. Then what?”
Millsap had already spent a year and a half in juvenile detention for fighting, according to his mother.
The attorney feels he needs help, not a lengthy sentence, and funding for treatment in Arkansas should be increased.
“It’s my opinion that this is an untreated 16-year-old who needs help.”
In turn he has filed a motion for mental evaluation as he says there is “reasonable suspicion [Millsaps is] not fit to proceed forward with criminal proceedings.”
The attorney closed with the following:
“I think it’s a tragedy and it has caused not only my client to be incarcerated because of this but it’s also caused a victim to be injured.”
Definitely a sick and vicious attack, and no doubt a combination of prison and treatment should be implemented.
[H/T:dirtpost.com]

SHARE this with your friends by clicking below!
Posted by yashmanu at 6:39 PM