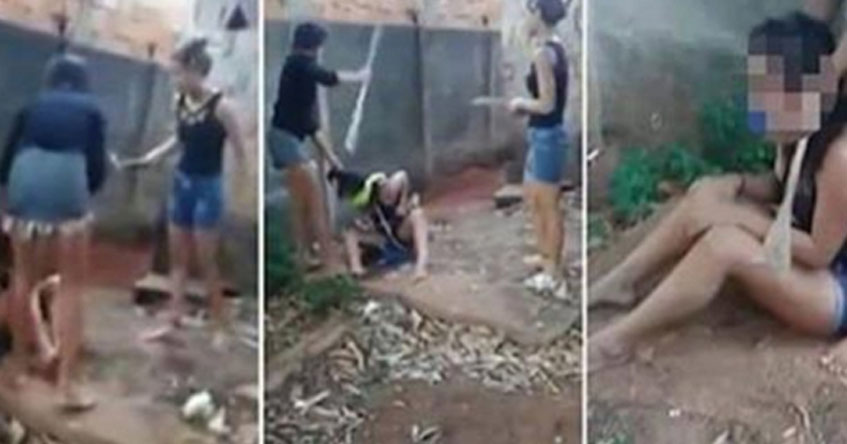 WARNING: This footage shows footage that some may find offensive. If you are sqeaumish please click off now.

There’s a lot for a parent to fear when their teenage kids start branching out, forming their own social circles and hanging out with friends, but you have to let them if you ever want them to learn. With that being said, teenagers are f***ing cruel.

A fourteen-year-old Brazilian girl is now scarred in more than one way for the rest of her life after a brutal and terrifying attack perpetrated by a few other girls jealous of her relationship with her boyfriend. She was initially lured to another home believing herself to be going to a party, but when she arrived she immediately began taking blows. The other girls (ages thirteen through sixteen) then decided to tie her up and torture her.

For over four hours this young girl endured abuse from sticks and even a machete, with the end-plan from her attackers being her death it didn’t appear as though there was much hope left, but she didn’t give up. Eventually she found her moment, her jealous attackers couldn’t stand around all day after all, and made her escape. Luckily the police have managed to identify and arrest those involved with this incident, though after watching the footage for yourself you may not want to hear about their prospective sentences…

For the kidnapping, torture and attempted murder of an innocent young girl the other teens may only be facing up to three years in a juvenile facility all due to their age, but that doesn’t seem like a punishment which fits the crime. This was something beyond cruel and it was premeditated; what those teenagers did is nothing short of psychopathic and deserves a little more iron fist than a few years.

Luckily the tortured young girl survived the encounter in the end and has been receiving medical attention for her injuries, but there’s no remedy for a betrayal of this magnitude. To know that someone hates you enough to kill you and actually attempts to follow through with it… this is why people buy and carry guns.
[H/T:viral4real.com]

SHARE this with your friends by clicking below!
Posted by yashmanu at 5:56 AM