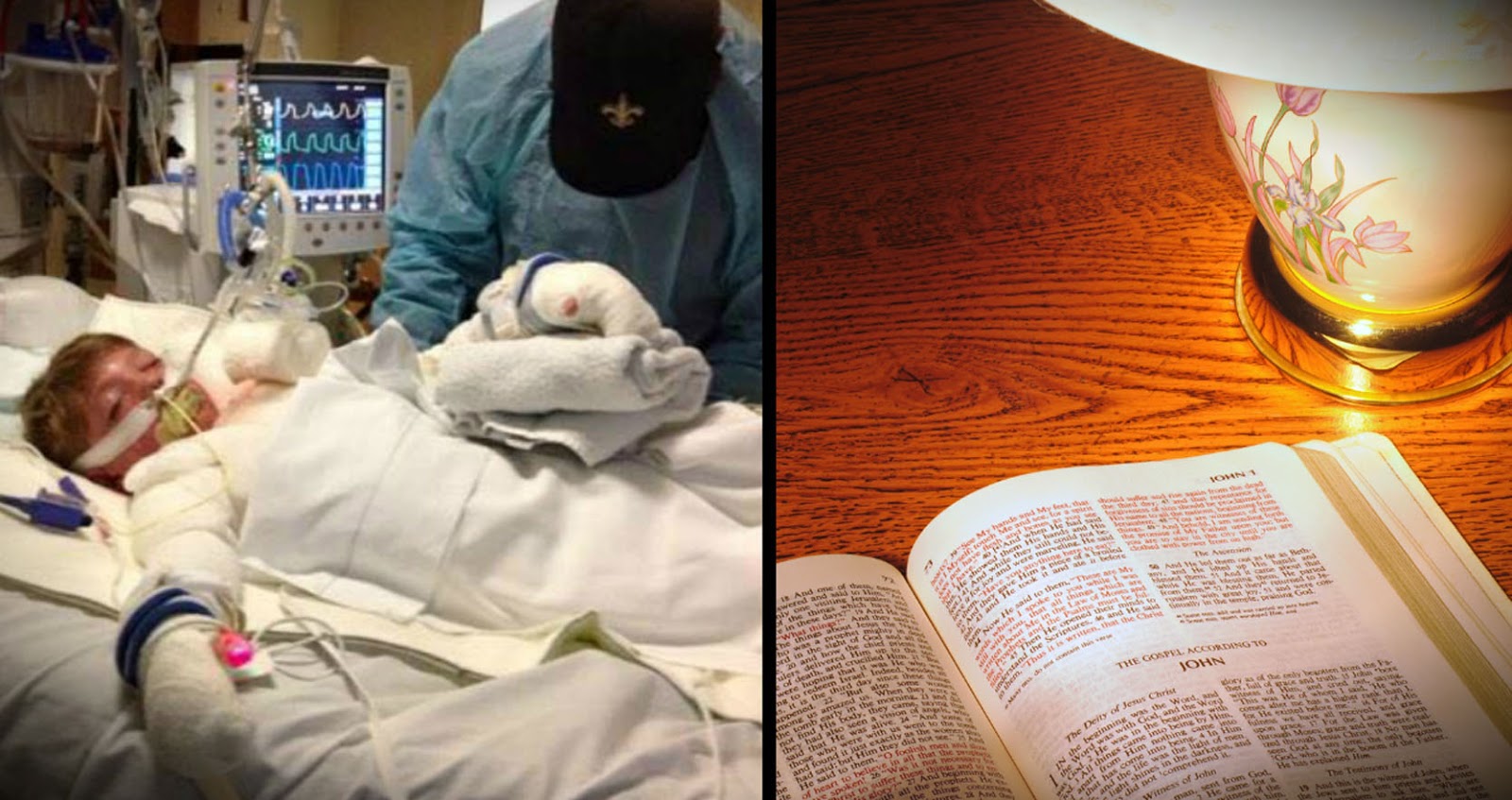 Mandy Suzanne Smith's son, Zachary, lay in the hospital, in a medically induced coma after an intensely serious procedure. The doctors had no idea whether he'd pull through or not. To say she was brokenhearted is an understatement. But just as His word promises, God drew near to Mandy when she found an open bible in her hotel room!

***WARNING – Some photos may be considered graphic*** Zachary's life-threatening ailment started innocently enough when Mandy picked him up one day from school. He complained of a spot of poison oak on his foot and said it felt like he had dirt in his eye. Mandy applied cream to the suspected poison oak, and didn't give it much more thought until the next morning. By then, Zachary had broken out in a red rash and had fever.

At the emergency room, doctors told Mandy it must be a viral infection. They sent mother and son home with some medicine and the expectation that Zachary would soon get better.

But he didn't. With each passing hour, he only got worse. The rash worsened, and now Zachary's lips turned red and were cracking.

Another trip to emergency care revealed that Mandy's little boy was most likely suffering from Stevens Johnson syndrome (SJS). Zachary was literally being burned from the inside out -- an allergic reaction brought on by a medication he was taking for headaches. He'd started taking the medicine nearly two weeks without any signs of an adverse reaction, making the diagnosis a complete shock. Zachary moved to another hospital where multiple tests and a dermatologist confirmed SJS was to blame. And things were even worse. Zachary's condition had developed into Toxic Epidermal Necrolysis (TEN) -- a life-threatening skin disorder causing blistering and peeling of the skin. When Mandy asked if her little boy would be ok, the grim answer shook her to her core.

Zachary was transferred to yet another hospital for a radical treatment. By then, his skin was blistering and peeling. The ride was excruciatingly painful for Zachary, and torturous for his parents.

"He screamed and cried the entire ride. He was in more pain than you could possibly even imagine, and as a parent, there is nothing in this world worse than seeing your child hurt and be that sick and not be able to do a thing about it," Mandy recalled.

The next step in Zachary's treatment was a radical procedure. The little boy was to be placed into a medically-induced coma so that surgeons could remove all of his skin, and then wrap him in a material called biobrane while his new skin grew back under it.

Mandy told her little boy she loved him and kissed him goodbye, with no idea whether or not he'd survive.

A few hours later, the procedure was complete. Seeing Zachary comatose, wrapped from head to toe in bandages, with tubes everywhere was more than Mandy could take. She broke down, asking the doctors if her little boy was going to be ok. The answer was no better than before -- they simply didn't know. Terrified and broken-hearted, Mandy headed to a nearby hotel. Checking into her room, she noticed an open Bible laying on the desk. She went to it, and found it turned to John 9. And it was just what Mandy's weary soul needed to hear.

"It was a verse about how Jesus had healed a blind man by putting mud on his eyes and then telling him to go to Siloam and wash it off," she explained. "And when he did his sight was restored. It was then and there at that exact moment that I had received my reassurance. I knew this was the Lord telling me, 'I've got this, put your faith in me and I will deliver.'"

And that's exactly what He did.

Zachary developed an infection in his lungs, and the serious skin disorder affected 90% of his body. But as time went on, he not only woke up, but started to get better. His parents will always be incredibly grateful for the excellent medical care he received. But they know their son's healing is nothing short of a miracle from God!

"Zachary told us that while he was in his coma, he was never actually asleep," Mandy said. "And that a strong angel named Samson held him in his arms, and that he had also seen his mawmaw patsy that had passed. He said he laid in her lap and she scratched his back. If that's not the work of God then I just don't know what is. We have been so blessed and I will always be thankful."

Sharing God's Work With Others

Not only is Zachary all better, but he's suffered no longterm complications from being sick. It's a situation that's very uncommon for SJS survivors. And Mandy knows it's just more evidence of God at work.

"I hope these pictures don't bother anyone, because in the beginning we never intended on anyone to ever see them besides family," she wrote on Facebook. "But I can't help but show Gods work. He took what was our biggest nightmare and turned it into our biggest blessing."

Zachary's transformation from perfectly healthy little boy to the verge of death is a terrifying reminder that we are never really in control. Faith doesn't mean we have all the answers or that we won't experience fear and suffering. It's only through surrender to God that we will find peace in those times, just as Mandy found in that open Bible!

Be sure to share this story with someone who needs a reminder that God is with us, always!

Doctors said their baby would die, so the family prayed (and got) a miracle! Psalms 34:18
Credit: Facebook / Mandy Suzanne Smith
SHARE this with your friends by clicking below!
Posted by yashmanu at 5:35 AM