Unbelievable! Fighting Housewives Bathe Each Other with Hot Water Over Man (Photo) 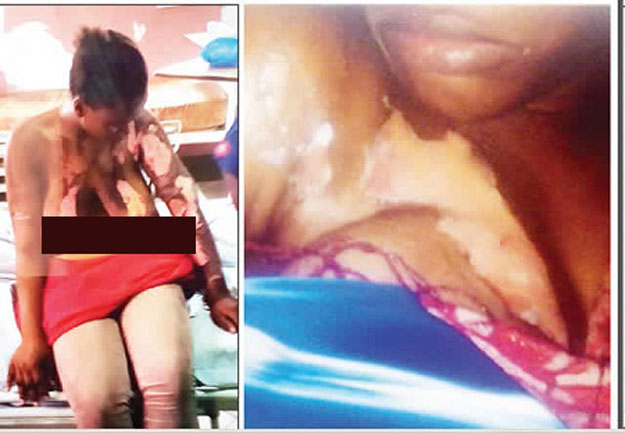 Two housewives have bathed each other with hot water while fighting over a man. The two women identified as Muyibat and Biliki were left with serious burns and have been admitted at the hospital.
According to Punch, the two women emptied a kettle of hot water on each other during the brawl which occurred at their residence in the Yaba area of Lagos State.
It was gathered that 32-year-old Biliki accused Muyibat (29) of marrying her former boyfriend, which caused bad blood between them. The duo could not hold the animosity anymore and decided to fight it out. It was during the fight that they poured hot water on each other.
They were both admitted to a general hospital in the state.
Our correspondent gathered that the case was reported at the Sabo Police Division and one of the parties petitioned the Lagos State Office of the Public Defender, which mediated in the matter.
Explaining how the incident happened, Muyibat said: “Biliki told neighbours that she once dated my husband and that she aborted for him during their relationship.

“She calls me Iyawo Sara (free wife).  I have never known peace in that house. She fights me over every minor issue.

“On Saturday, I went to the market with my husband and when we got home, my child started crying.

“Biliki’s younger brother, Ahmed, came out and shouted at him and I cautioned him.

“His sister then picked up a quarrel with me and started raining curses on me. I did not talk because I was observing a fast. While she was abusing me, I sneezed and said, ‘Ausubillahi minashaitani rojeem’ (God, deliver me from the devil).”
Muyibat said Biliki, who is also a Muslim, thought she was referring to her and queried her for calling her a devil. She alleged that Biliki attacked her in the process.
“I removed the water I was boiling for my vegetables and put it on the table. She (Biliki) held my head from behind and poured the hot water on me.

“Her younger brother slammed a plastic paint on my head, while she drew my hair. Both of them assaulted me,”Muyibat added.
The two were admitted at a private hospital. Muyibat revealed that Biliki had earlier in May threatened to pour acid on her. Biliki was left with burns on her breasts, chest and hand and said she was attacked first by Muyibat.
Biliki also denied ever dating Muyibat’s husband, saying Muyibat was fond of making trouble with her and efforts to reconcile them had always been rebuffed by her.
She said, “I went back to my parents’ house when I had issues with my husband. Because of that, many of the tenants started ridiculing me.

“I was ill that Saturday and was sleeping beside my baby. Her child had come to play with my baby when she called him back. When the child didn’t heed her call, she hit him and the child started crying.

“Another child passing through the passageway was also crying that partcular time. My younger brother asked the other boy to stop crying and Muyibat abused my brother.

“My brother reported her to me and I told him not to reply her. She then started insulting me. We fought and our neighbours came to separate us.

“I was backing her when somebody suddenly shouted, ‘hot water!’ As I turned back with my hands raised, she emptied a kettle of hot water on me. Because my hand was raised when she attacked me, a little of the water splashed on her.”
The Director of the Lagos State Office of the Public Defender, Mrs. Olubukola Salami, described the incident as horrific.
She said, “This horrific incident was totally avoidable as either of the parties could have just walked away and lodge a formal complaint at the nearest police station. But they decided to take the law into their hands and the result was unfortunate.

“Domestic violence has repercussions and it’s totally unacceptable anywhere. The Lagos State Government will deal harshly with those who disturb public peace.”
The Lagos State Police Public Relations Officer, SP Dolapo Badmos, confirmed the incident. She added that the victims were both given medical papers for treatment, but they had yet to report back to the station.

Please SHARE With Friends !!
h/t: www.naijafold.com
Posted by yashmanu at 5:34 AM